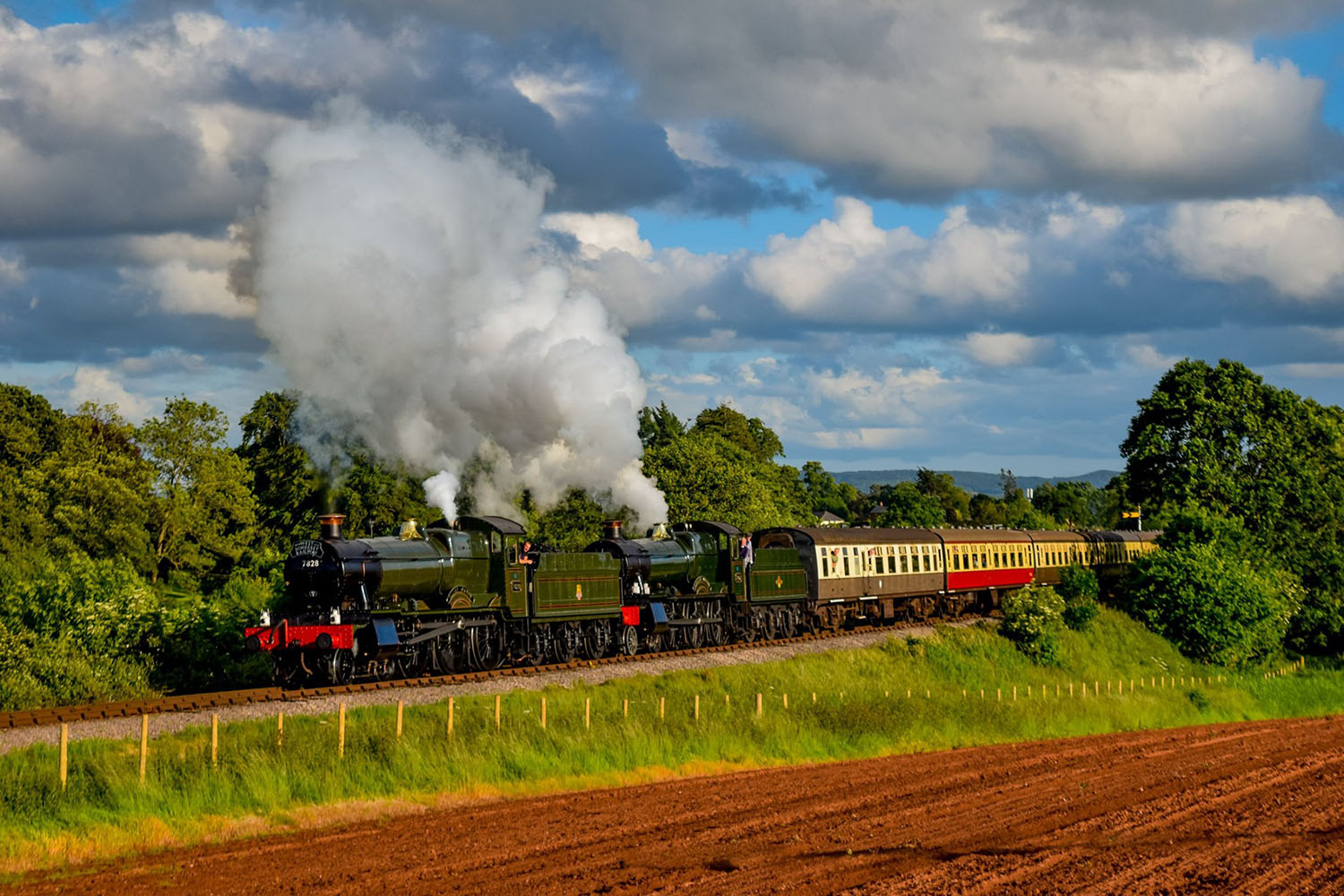 The weekend of the 8th & 9th of June was a celebration for the WSR to commemorate the 40th anniversary of the reopening of the Minehead branch, as such a special train was scheduled to run consisting of 14 coaches and double headed Manors.

I was lucky enough to be able to travel on this train, so here are my thoughts.

Saturday evening was cool but sunny as the last service trains arrived at Bishops Lydeard, to allow The Special to be set up, the two Manors 7828 Odney Manor and our very own 7802 Bradley Manor, made their way down platform two with the rest of the stock the train was formed and after hellos and instruction’s both locos moved out of Bishops Lydeard to back into platform 2 ready for departure at 7:15pm.

Because the train was so long the lead engine was past the starter signal and therefore we had to be green flagged out by the signalman standing on the starter signal ladders, with 4 miles of 1:80/81 ahead of the locos to Crowcombe both 7828 & 7802 attacked the climb in fine style barking like only Manors can, this in fact was the same for all of the journey both loco’s handling their load with ease. As we approached Williton we slowed for the token exchange, but then instigated the climb to Watchet with the same vigour, call me biased but the piece de resistance was the start from Watchet also on a sharp curve and against a gradient of 1:76 after a slow on the curve over the mineral railway, both Manors commenced the climb which to use modern parlance was awesome (I certainly heard 7802s distinctive bark).

Leaving Washford behind, it was a drop down the cutting and heading for Blue Anchor where we trundled through the platform where a young lady in Victorian dress complete with driving goggles was having some pictures taken, passing the box ,once again our two Manor’s showed what they were made of and, passing a group of photographers they let rip with all kinds of whistles including that well known “Yorkshire anthem” (On Ilkley Moor Ba t’at).

Slowing for Dunster crossing, we leisurely rolled on to Minehead were we had to stop outside Seaward crossing to allow the locos to detach and turn while we waited for a diesel to drag us back into the platform (14 coaches + two manors is too long to allow running round).

7828 was turned first while 7802 went for water then turned. We departed Minehead later than planned but never the less the return journey was equally spectacular, as the sun sank in the west you could see the red glow from the locos fires in their exhaust (very stirring), we arrived back at Bishops Lydeard with a train full of very happy customers.

The night did not end there for our crews as there was the matter of putting the stock and then the locos to bed, this was carried out by our very own 7802, who was eventually put to bed at about 12:15am.

May I say from a personal point of view this was one of the most enjoyable special trains I have travelled in on a heritage line, and it was all down the consummate professionalism of the loco crews, Driver: 7828 Rich Hiscox, Fireman: Jonathan Jones-Pratt. Driver 7802 our very own Terry Jenkins, Fireman: John Stather.