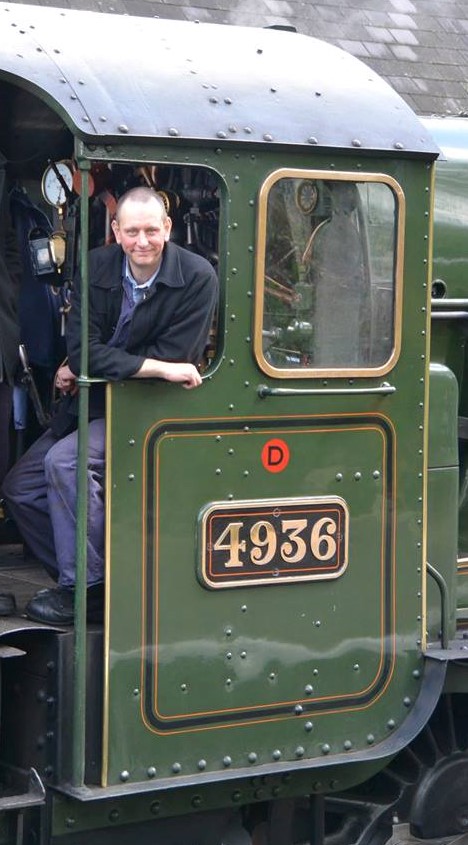 Adrian became involved in the SVR initially on the signalling side, before adding footplate work to his volunteering in the mid-1990s working his way up to driver. Having been a shareholder for some years, Adrian was Membership Secretary from 2018 to 2021, becoming a Trustee in 2019 and Chair of the Erlestoke Manor Fund in 2021. With a passion for all things Great Western, Adrian’s interest and involvement in the Fund has been particularly driven by the hands-on approach in maintaining locomotives 7802 and 7812 in operating condition, the encouragement given for supporters to get involved closely with the locomotives and the Fund’s planning for the longer term.

Paul served as Chair of the Fund from 2018 to 2021, having been an active helper at our working parties over many years. He has also been prominent in SVR management as a former Chairman of the Board and the driving force behind various past and some current SVR infrastructure initiatives. One of these in particular has been a frequently shown TV heritage railways documentary featuring him leading the restoration of that wonderful facility on Bewdley island platform, the Victorian gentleman’s convenience! As fully footplate trained, he has been a familiar figure driving and firing our locomotives, even officiating when Princess Anne took the regulator in 2015. Paul is particularly interested in developing future strategy as part of the EMF’s incorporated, charitable state, to encourage younger people to take an active role in the Fund, enhance its attraction to new active members and ensure a succession of management to continue and perhaps expand our vision for the future.

Tim was elected as a Trustee in 2020, having volunteered as Treasurer following John Whitcomb’s passing in late 2019.

Tim’s been a heritage railway enthusiast and frequent visitor to the SVR since childhood, a member since his teens, a regular working member (as a signalman) since 2013 and serves as a Director of the SVR Charitable Trust. Incidentally, Tim’s wife Jane (a GP) is also a working member as the SVR’s Chief Medical Officer.

Professionally Tim’s a Vice President of Information Technology for a major European energy generation and trading company. His other interests include hill walking, sailing & classical music.

Jane was appointed Fund Secretary in September 2020 and elected as a Trustee in 2021. She was the Severn Valley Railway’s first HR Manager also running the Heritage Skills Training Academy from 2016 until February 2020, when she became an SVR working member. Her career in the public, private and not for profit sector has focused on human resources and governance. Jane brings experience as company secretary of other Community Benefit Societies and currently sits on a number of housing association boards. Widening her involvement in the Fund, Jane took on the reigns of Membership Secretary in 2021, along with regularly running the Fund’s sales coach at Bewdley Station. She is particularly interested in encouraging young people to become involved in the Fund’s activities through education and learning.

Terry is a Chartered Civil Engineer whose career was primarily in highway and bridge design, construction and maintenance, rising to senior management roles. Terry is a Trustee of the EMF concentrating on arranging the “hands on” side of the funds locomotives. He is also a steam driver on the Severn Valley and West Somerset railways. For many years Terry served as Chairman, leading the Fund through a strengthening of its relationship with the Severn Valley Railway, successful overhauls of 7812 and 7802, along with a period of mainline running.

Stephen started working on steam locomotives as a young child with his father and grandfather at the local model engineering society. Through model engineering, he met John Hancock (now EMF president), who introduced him to the Fund. Stephen has been a working member of the fund since he was 16, starting off working on 7812 at Swindon Works and more recently on 7802, 7812 and the new tender at Tyseley. Whilst working with the fund, he has also graduated with a Mechanical Engineering degree, and is now a Chartered Engineer working for Rolls-Royce. Stephen is also a driver on the GWSR.

Chris is currently the youngest trustee within the EMF, his first introduction to the world of steam was regular visits to the SVR during the school half term. Eager to become involved with the SVR Chris joined the coal-yard miniature railway at Kidderminster where he stayed for several years. Once old enough Chris joined the SVR MPD at Bewdley, within the first 12 months he met fellow EMF trustee Terry Jenkins, who enlightened him to the fund’s activities with the imminent overhaul of 7802. Chris soon became an active working member and shareholder and assisted throughout the overhaul 7802 and upkeep of 7812. Professionally, Chris has successfully completed his apprenticeship with a local Train Operating Company as a maintenance technician at Tyseley TMD where he continues to work.

He is also a qualified fireman on the SVR alongside being a keen model engineer and classic car enthusiast.

Peter has been a lifelong railway enthusiast from the sight, smell, and sound stance rather than from engineering. He first became involved as an EMF shareholder when Bradley Manor returned to service and, upon retirement from his employment as a CEO of a credit union, he decided to offer some of his time to the EMF.

He initially took on events organisation (part of his background).

Retail work in the Sales Coach at Bewdley plus donning his newly purchased overalls for work at Tyseley and Bridgnorth (both activities being well outside of his previous experiences) quickly followed.

He became a trustee in May 2020 and took on oversight of the sales coach at Bewdley station and more general marketing communication roles as well.

Philip was one of the earliest active members of the Fund, assisting with the initial recovery of Erlestoke Manor from Barry scrapyard in the 70s and has been closely involved ever since. From that time until the mid-90s he was also an EMF trustee, only surrendering that position to devote more time to his light engineering services. On reaching retirement he was able to take up trustee duties again, but his light engineering experience is put to great use on specialist engineering tasks for the locomotives.

David’s passion for all things railway started as a result of living literally just a few yards from the railway and Aston station in Birmingham, where there was also the delight of Aston shed just a few minutes walk away. David says, ‘As a small boy I was fascinated by the huge locomotives belching steam and smoke that seemed to shake our house as they rolled passed my bedroom window. This passion for steam has never left me and being an Erlestoke Manor Fund volunteer has enabled me to keep this lifelong love of steam alive.’ David volunteers in the Fund’s sales coach at Bewdley station raising valuable income for the Charity.

David has been an EMF shareholder since 1973 and served as a Trustee from 1991 to 2020. When David stepped down as the Fund Secretary in 2020, he kindly agreed to stay on as Newsletter editor and additionally manages the Fund’s sales coach at Bewdley station which, assisted by other volunteers, raises valuable income for the Charity. As if this wasn’t enough, David has been actively involved in our locomotive overhaul works for many years. Previously David had a worldwide career in civil engineering and project management.