The rails are rusting, the line through the Shropshire country side is quiet, apart from occasional shunting moves around Bridgnorth shed. Locos stand in the yard cold and forlorn, chimneys wrapped against the elements reminiscent of the mid 60s in the dying days of steam. The uncanny apparent lack of activity is in stark contrast to the usual bustle of movement and hiss of steam we have been accustomed to. A subdued air hangs over the railway north of Bewdley following the double dose of deluges from above during June and July. The totally unexpected storms which washed out the railway formation at so many places through the Severn Valley have left both our locomotives marooned at the north end. We can but thank the Lord that at least the first storm struck after trains had finished running for the day.

But all is not gloom and doom – far from it! The railway and its supporting organisations have responded with vigour to the challenge and, although the situation initially grew worse with further landslip movements becoming apparent, the repair works are now well advanced. The washouts undermining the track at Folly Point, Victoria Bridge, by the caravan park north of Hampton Loade, Knowlesands and Oldbury Viaduct have now been stabilised and track re-laid. Works on the two major washouts at Highley are underway as is the “soil nailing” operation to stabilise the slipping hillsides at Northwood and Sterns. The work has necessarily had to be contracted out due to its large scale, the resources required and the technical design and supervision needed to meet safety standard 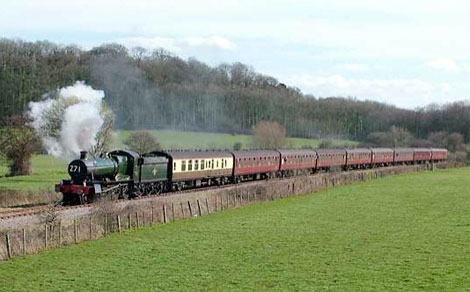 After running the Past Time Rail mainline “Cider Express” to Minehead on March 10th, and following a successful visit for the West Somerset Railway Gala on the two following weekends, 7802 Bradley Manor was scheduled to return to the SVR on Wednesday 28th March, heading the Severn Valley Wanderer for the return journey from Bristol to Bridgnorth. Two days before, the EMF support team assembled at Minehead to prepare the engine for the journey. 7802 was re-fuelled with the Russian coal used by the WSR, which, although more expensive, proved to be good steaming coal in spite of having some slack mixed in it. As the fitness-to-run exam was arranged for midday Tuesday at Bishops Lydeard, 7802, together with the SVR support coach, worked to there with the first passenger service train of the day. At Bishops Lydeard, 7802 was stabled overnight smokebox to smokebox with recently restored small prairie no 5521. The latter had already been fitted with its large air compressor ready to be transported by sea just a few days later for its East European tour which has since been widely reported. During the inspection of 7802 the examiner found some loose eccentric link bolts and also two RH trailing axle box horn stay nuts which all had to be tightened and re-pinned. 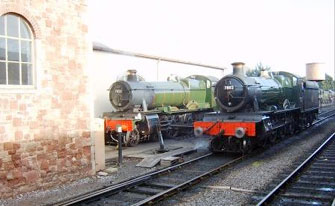 7802 and 7822 at Minehead March 2007
On Wednesday 28th March, with no turning facilities yet available on the WSR, 7802 had to journey to Bristol tender first together with the support coach. However the original plan to travel around the St. Phillips Marsh avoiding line was not followed. Instead 7802 was brought directly into the covered station at Temple Meads, waiting on the middle road for some time before going to Dr Days Junction to turn round on the triangle. After returning to take water on platform 4, 7802 moved again to the middle road to await the diesel hauled charter train to arrive at platform 4 from Bridgnorth. 7802 with support coach was then coupled on to the rear of the train which, top and tailed with the diesel, then retired to Bedminster Victoria Park sidings. All this movement provided the public with nearly 2 hours of steam powered entertainment at Temple Meads station! Eventually the diesel returned to base and Bradley Manor pulled the train back into Temple Meads to pick up its passengers.

Departing Temple Meads at 14.38, 7802 accelerated rapidly, passing Stapleton Road at speed, and climbing Horfield Bank well with plenty of acoustics. Unfortunately double yellow signals encountered near Filton Abbey Wood brought the train to a stand at a red signal near Patchway Junction, thereby losing several minutes. Proceeding forward, steady progress was made through the single bore Patchway Tunnel, which had been part of the original route to the New Passage ferry crossing before the Severn Tunnel was constructed. Speed was restricted through Pilning Station but then the regulator was opened and the train entered Severn Tunnel at speed. Climbing vigorously on the 1in 90 gradient out of the tunnel, the support crew experienced alarming noises of loose ceiling debris blasted by the sharp exhaust and bombarding the support coach roof.

After passing Severn Tunnel junction, the train was switched to the relief line for the water stop at Magor. Bypassing Newport station, the train had to stop for some time on the curve before reaching Maindee Junction North to let a service train pass. Moving again, some effort was required to keep time on the mainly rising grades towards Pontypool Road and Abergavenny. As had been predicted, rain started to fall but fortunately eased off before reaching Llanvihangel Bank. After a vigorous climb, 7802 breasted the summit at an estimated 31 mph followed by a very fast run down to Hereford. Here the time allowed for the water stop of 17 minutes was too short and only 3500 gallons were in the tender before departure. After Ledbury the dreaded narrow single line tunnel on a rising grade was negotiated at a steady pace, with humid smoke entering the coaches. This was possibly one of the worst tunnels in Britain for banking steam trains through. After a brief stop to let passengers off at Worcester Foregate St, the train finally arrived on time at Kidderminster. Here a diesel was attached for reversing the train back on to the SVR. It then ran top and tailed back to Bridgnorth, eventually arriving in darkness.

>This had been predicted to be Bradley Manor’s last main line run and, if this proves to be the case, then this was a superb finale. This maybe the reason why, for a midweek trip, it was surprisingly successful being fully patronised and with a large number of photographers and watchers on the lineside. It was a sad occasion for Past Time Rail who had used Bradley Manor on their first tour 10 years ago. It appears unlikely that any Manor class engines will be seen on the national rail network in the foreseeable future, but one should never say never. In the steam movement the unexpected often occurs.

7802 Bradley Manor; At the time of the catastrophic floods of 16th June, Bradley Manor was at the Bridgnorth end of the line and consequently has languished there ever since, out of traffic with chimney wrapped against the elements. Services at the Kidderminster end to Bewdley only have been run with the Black Five 45110, mogul 46443 and small prairie 4566, all stabled at Bewdley on the evening of the storm. Pannier 5764 has since been transferred by road to the south end, but moving larger locos out of Bridgnorth is not an easy exercise due to restricted road clearances so Bradley and Erlestoke are likely to remain at the north end of the line until the severed lengths of the line are re-connected.

7812 Erlestoke Manor; At least here we have some good news with substantial visible progress on 7812 which now looks like an almost complete locomotive. Indeed by the time you receive this newsletter, it may well be running in on what length of line is available from Bridgnorth. The work has benefited from efforts of the SVR paid workshop staff who have had a much reduced maintenance role with only a fraction of the normal locomotive mileage to service following the flood damage. The bogie was reassembled and replaced under the locomotive in May following several weekends’ efforts by our EMF team, sometimes up to 8 strong, de-greasing, scraping and repainting. Fully re-wheeled and lowered off the jacks, the chassis was then moved round to the boiler shop. There it was re-united at last in June with the overhauled boiler, which had been re-tubed, cladding applied and provided with a complete new smokebox. The cab roof, until recently stored at Bewdley, was then refitted followed by all the plumbing work, cab fittings, new chimney and handrails. The locomotive has since been moved into the paintshop where final painting and lining is now well advanced. This is the stage reached at time of writing at the end of October. Many excellent recent photographs of progress on Erlestoke’s overhaul can be seen on the Great Western (SVR) Association’s website, as well as some on our own Erlestoke overhaul pages. 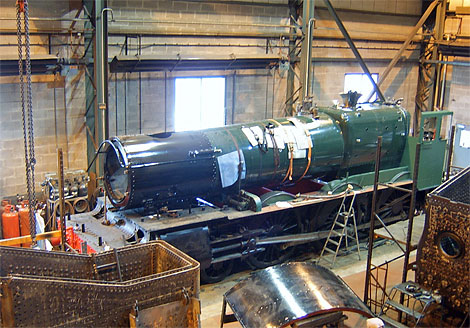 Spare Firebox; Some good fortune came our way around Easter when observant SVR staff passed on the tip that 7827 Lydham Manor’s former copper inner firebox may be available for purchase following its replacement on 7827 by a new all-steel firebox. With Graham Beddows, SVR’s boilershop manager, confident that SVR expertise was up to repairing the firebox parts, the decision was taken to purchase and the items were duly delivered to Bridgnorth in May. Initially it had been agreed that this would be a joint SVR/EMF purchase but to assist SVR finances following the floods, EMF subsequently agreed to fund the full purchase. This acquisition puts EMF in a position to work towards having serviceable replacement firebox parts available by the time Bradley’s current certificate expires in 2011 and could considerably shorten the next period out of service for overhaul.

Meanwhile fund raising through the Fund’s sales coach at Bewdley continues as strongly as ever with trustee Graham Stevens and wife Trisha firmly stamping their own mark on the operation. The success of their efforts is reflected in the way the already healthy bank balance inherited from the late Geoff Richardson’s sales management is steadily growing and is well on the way to securing future objectives of the Fund. These objectives initially focus on a repaint in the near future for Bradley Manor but later may include a new smaller tender for that engine plus taking the refurbishment of the spare firebox parts to a further stage.

The flood curtailed services requiring the SVR’s Christmas Santa train operation to focus on the car park siding at Bewdley instead of Arley, has meant the displacement of the GUV sales coach to platform 3 for the next two months. Vulnerable stock from the upper shelves all had to be made secure on the floor prior to the move. The move took place on Thursday 18th October and by Saturday early afternoon with power restored to coach, and stock lifted back on the shelves, trading recommenced with gusto. 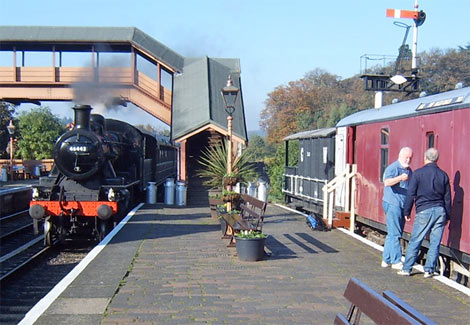 Having experienced some problems arising during disposal with the rocking grate on 7802, the SVR has decided to revert to a more traditional grate and ashpan arrangement for 7812 but with the grate modified in a way which has been successfully used on the West Somerset Railway. The new arrangement has a drop section in the middle of the grate and Jan Chojnacki has posted the following instructions for its use:

Step(1): Before commencing disposal, position the locomotive over a pit to enable the ashpan to be raked out at the same time as the fire is dropped.

Step(2): Using a suitable fire iron, break up any clinker that has formed on the fire bars and push the clinker forward, onto the front part of the grate.

Step(3): Leaving a clean fire at the back of the grate, use the engine’s toothed rake to push forward the remaining fire to expose the drop grate.

Step(5): Having properly disposed of the old fire and clinker, all the fire irons can now be put away and the drop grate can now be closed and locked off.

Step (6): Having thoroughly raked-out and shut up the ashpan, the rest of the disposal can now be completed.