At long last the 7812 restoration saga is over. Amid great celebration on 20th March, Erlestoke Manor re-entered service on the Severn Valley Railway, triumphantly hauling the re-opening special (and first southbound service train the following day) to complete another dramatic saga, the rebuilding of the railway following the catastrophic floods of the summer of 2007. This edition stands both as a tribute and a celebration of the successful conclusion of both achievements.

However we have had to wait a little longer to see both our two engines working together as Bradley Manor has taken a bit of re-awakening following its nine month slumber in Bridgnorth yard. Some moving parts on the tender had seized up and it has taken till late April to get this loco moving again. 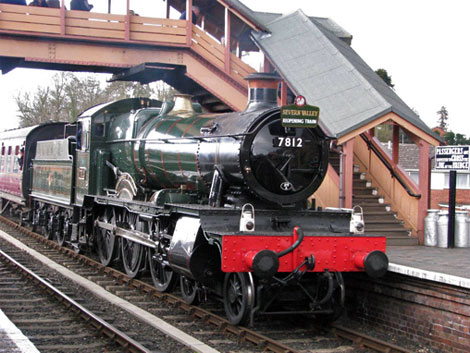 Shareholders Assist with Running in 7812

Following our invitation in the last newsletter, over 30 of our shareholders who responded, none of them qualified footplaters, actually got their hands on both regulator and shovel over 3 days during 7812’s running in period in early March. Under the watchful eyes and guidance of regular driver Terry Jenkins (EMF Chairman) and fireman Steve Jones, our novice footplate team took turns to drive and fire a gleaming Erlestoke Manor something like 150 miles in 17 return trips over the three days between Bridgnorth and Hampton Loade.

Not only that but we had a 6 coach train to pull! There was no siding space to stable the LMS set of coaches, marooned at Bridgnorth during the flood close down, and both platform tracks were needed at Bridgnorth for running round the train. So there was no option but to take the full train with us, which only added to the challenge and enjoyment of the trips. The front cover picture of the April Steam railway was taken during the final day of these trips. Was it you driving or firing?

It is hard to believe 7812 has been out of service for some 22 years. Arriving at Barry scrapyard in May 1966, eventually it was bought by the EMF group, leaving Barry in May 1974 for the SVR where it was restored to running condition by September 1979 returning to the BR mainline in April 1982 together with 4930 on the Welsh Marches Pullman. After several years working on the SVR, eventually the boiler ticket ran out in 1986.

At the time there was a queue for locos waiting overhauls. It seemed that the engine would be out of use for some time, which in the end proved to be correct. In order to progress work 7812 was sent to Swindon Works, part of which was open privately to do mechanical and boiler repairs. Stripping and assembly work was carried out by EMF group volunteers in order to save on costs while also progressing the job. The engine was in re-assembly condition when the workshop it was in had to be vacated together with 7821 Ditcheat Manor. So 7812 returned to the SVR at Bewdley.

There was still a lot of work to be done, some of the steelwork at the cab end needed renewing, suffering from hosing down and corroded rear wheel guards. Meantime 7802 bought for spares back in November 1979, restored to running condition using some parts from 7812, now had its boiler ticket running out. Dilemma! There was now a chance of both engines out of service. An agreement between the SVR and EMF to put the overhauled boiler for 7812 on to 7802, which recently had its driving wheels re-tyred, was made to keep 7802 in traffic. 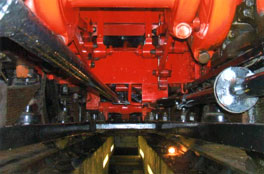 Underneath 7812, painted many times by John Whitcomb! Photo by Colin Willets

So 7812 was moved to Bridgnorth, this taking place on the 20th October 2003. Here, while waiting for the boiler ex 7802 to be overhauled by the SVR, the opportunity was taken to have the driving wheels re-tyred. With wheelsets removed for the third time it was decided to do an alignment check on the chassis, which showed some grinding of the horn plates was necessary, especially the right hand rear set. After some faulty new tyres had to be replaced on a couple of the driving wheel sets, and modifications done to axlebox keeps, re-assembly began in earnest. At this period 7802 was still running the odd mainline rail tour and its bogie tyre flanges became out of gauge and worn, therefore the refurbished bogie from 7812 had to be fitted in its place. The bogie wheels ex 7802 were then sent for re-tyring, the bogie being overhauled before refitting to 7812.

At last the overhauled boiler with its new smokebox was installed before the loco went for repainting. Most of the pipework was renewed, which required a lot of effort by the Fund. Eventually 7812 was attached to its new 3500 gallon well tank tender, which had been made at a Gloucester fabricators, EMF labour assembling and fittings parts and wheel sets from an old tender. With her new paint job in lined out BR green, 7812 looked super, raising many favourable comments.

February 2008 came, first steaming and test runs took place, The usual steam leaks to tighten up and adjustments to be made. Several runs light engine to Hampton Loade were made for running-in to take place. Surprisingly, since some motion parts were changed, the front end sounded good, so valve adjustments may not be needed. During March 5th, 6th and 7th shareholder trips were run, first revenue trains done by 7812 for a while. At last the loco re-entered public service, triumphantly hauling the first train at the SVR line Easter reopening following the flood damage.

This is only a brief resume of 7812 rebuild, lots of work by many people and problems overcome too lengthy to describe. It is ironic that 7802 an engine purchased for spares has had itself had to have parts ie boiler, bogie, pipes, etc, from 7812 to keep running. However, hopefully 7802 and 7812 should be in service together for the next few years. 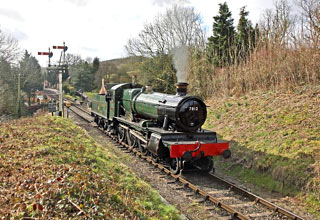 The Future Strategy – Where do we go from here?

With both our locomotives now in operational service, our thoughts are turning to the strategy for the future. The trustees’ first concern is to find a worthwhile objective which will hold the active restoration team together. The two main aspirations, as indicated previously, are (a) to construct a 3500 gallon tender to replace the well worn 4000 gallon one currently behind 7802, and (b) to have replacement firebox spares ready to minimise 7802’s next period out of service when the current boiler certificate expires in less than three years time.

More immediately, completion of both locomotives allows us for the first time to critically review what’s in our stores vans and decide what should be retained for spares or sold for other deserving restoration projects. Rationalising this should enable us to finally clear heavy locomotive spares from the stores end of the sales coach allowing that end of the GUV to rise on its springs. This will enable the access door to open more easily over the platform surface and make much needed room for more sales goods! Another early objective is to repaint the said coach.

On Saturday 13th September, a special train will be run in memory of the late Geoff Richardson, our former EMF trustee and for nearly 20 years until the end of 2005 our much loved shop manager of the sales coach at Bewdley. All our shareholders and guests are invited to make a reservation to travel on this train, the profits of which will be donated to two charities, Macmillan Nurses and SSAFA (Soldiers, Sailors and Airmen Families Association) in which Geoff played a prominent regional role as Divisional Secretary for many years.

The daytime train is expected to feature at least one of our locomotives and will travel the length of the line from Kidderminster to Bridgnorth. On the return, there will be a short commemorative service at Bewdley before a fiery final departure to Kidderminster. To make your reservation, you are asked to write to David Kilner at 3 Woodbury Park, Holt Heath, Worcester, WR6 6NT or email him on kilnerdr@halcrow.com. Price about £15 or £35 with full dining. 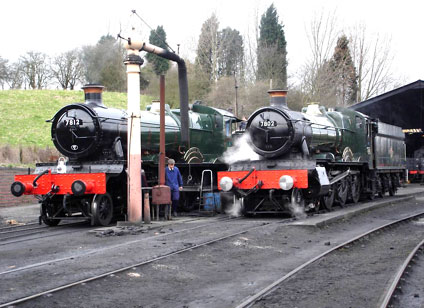 Unashamedly this page is a celebration of the crowning achievement of the successful completion of returning both our locomotives to operational service 35 years after the formation of the Fund. For Erlestoke Manor this means that for half its existence, it has been in the ownership of the Fund. For both locomotives it comes in the seventieth year of their existence. Actually each locomotive has been overhauled twice now during our ownership, but this is the first time both have been operational together. Both now can jointly carry out the flagship role on the Severn Valley Railway.

The above photograph was taken by Des Ainsworth on the day before re-opening with both locos in steam together for the first time. Unfortunately the discovery of the seized vacuum cylinder on 7802’s tender prevented its return to service as hoped for that day. However the honours were always intended to be taken by 7812 Erlestoke Manor for the re-opening train and the picture below shows the loco crossing the re-opened Victoria Bridge on one of the earliest northbound trains. 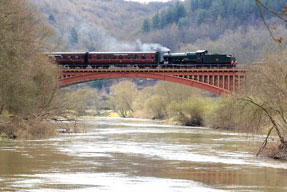 Erlestoke has since been in regular operational service and is already well into its second thousand miles of service since overhaul. 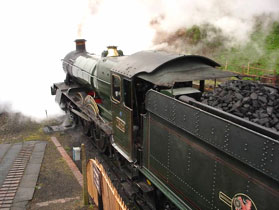 Bradley was never going to be kept out of service for long and following re-assembly of the tender vacuum cylinder after a complete strip down, 7802 was back in charge of steam services during the Diesel weekend 26th April. Des Ainsworth took this photo of 7802 preparing to leave Bridgnorth shed for the first steam service of the day.

Ironically, Erlestoke was at the time receiving attention to its vacuum system so it will probably be Mayday week end when they both can be seen in operation together for the first time since 1965.