The Erlestoke Manor Fund is pleased to announce that a private photographic charter event has been organised for Friday 10th October 2008 on the Severn Valley Railway using locomotives:

This event will allow recreation of a Cambrian line combination of a Manor & Dukedog – something not seen since 1960 we believe!
Both the above locomotives (and EMF’s other locomotive 7802 Bradley Manor) were Cambrian based in the late 50’s/early 60’s) 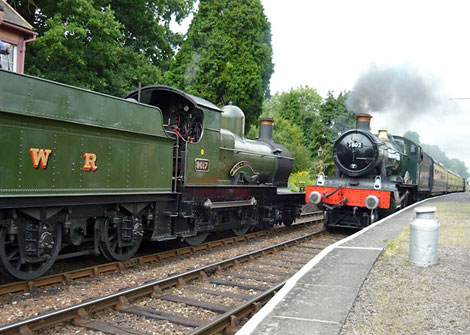 Both locomotives will face the same way allowing for some double heading during the day.

The day will commence at 09.00 at Bewdley and have use of the line between Hampton Loade & Bewdley Tunnel.

Part of the day will be spent at several locations between Hampton Loade and Bewdley.  Stock – Passenger; locos double headed.

During the day a stop will be made at Bewdley where 9017 will be posed with a short freight train with 7812 on a passenger train.

For the rest of the day the Bewdley to Bewdley tunnel section will be used with further locations double heading (passenger) or individual locos on a short freight train.

All subject to availability.
The number of participants is strictly limited to 35 and places will be allocated on the basis of first receipt of completed booking form & full payment.