A Busy Year and Another Ahead! 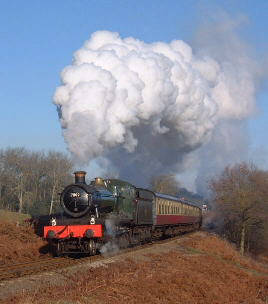 It’s been a hectic year! TPWS installation on Bradley Manor, overhaul commencement of the boiler for
Erlestoke Manor and new driving wheel tyres procured, refurbishment of all our vans, the sales coach open at both ends, a Jubilee visit by 7802 to Swindon – it’s all been happening with our supporting volunteer workforce as large as it has ever been! The goal of our two engines running together, one of them certified for mainline service is now in sight! The busy 12 months since the last newsletter has rather distracted the editor from getting this edition published – sincere apologies! (The unfinished draft has been updated several times to change future intentions to past achievements!) Also during this time, 7802 Bradley Manor has run nearly 10,000 miles in revenue earning service on the SVR giving enormous enjoyment to passengers and satisfaction to footplate crews.

Further to the last Newsletter’s revelation that Bradley Manor’s current 4000 gallon tender no 2792 ran behind 7026 Tenby Castle, Peto’s Register records that, from March 1958 to July 1959, it had been partner to Laira based 6027 King Richard I. This appears to have been the only King it was ever coupled to however. Information on its other pairings would be welcome. Both 7802 and 7812 were London Midland Region stock for the last three years of their BR existence along with about 17 other Manors on the Cambrian. Ironically, had they stayed with the Western Region, they might never have survived! The LMR obviously liked them!

During the Queen’s Golden Jubilee celebrations in early June last year, Bradley Manor was transported by road to Swindon for one week and put on display on a short length of rail at the entrance to the Designer Outlet, a trendy shopping mall which was formerly part of Swindon works. In light steam during the visit, Bradley’s whistle could frequently be heard as excited children, invited on to the footplate, discovered what the suspended chain under the cab roof was for. Visible nearby, in the food hall and Steam museum respectively were SVR’s other locos, 4930 Hagley Hall and 7325 Collett Mogul, which are there currently on loan. Recent news indicated that the last remaining rail engineering activity in part of the former works may finally cease. It will be recalled that 7812 Erlestoke Manor (alongside 7821 Ditcheat Manor) was under repair there until July 1998, the boiler having since been returned to service on Bradley.

7802; Since returning to service in April, 7802 Bradley Manor has been performing well, completing over 9000 miles during the 2002 season in continuous daily service except for boiler washouts. With the new hopper ash pan and rocking grate working very successfully, it has become a firm favourite with footplate crews. With intense use, the resplendent paint finish, applied painstakingly over several weeks during March and April last year by shareholder Dave Massey, assisted by John Whitcomb has now begun to develop a weathered look, although John has been giving regular polishing treatment to maintain the superstructure finish. The wheels, all repainted black in April by Colin Willets and David Kilner, have now however reverted to the more usual oily brown. After some deliberation and wrangling with cash flow forecasts, the Committee took the decision in October to place an order with Heritage Rail Traction for the fitment of TPWS (Train Protection Warning System) to 7802 to enable it to run on the mainline again. The equipment, supplied by Thales, (also experts in warship electronics) was installed during an intense week of activity during February in between weekends in SVR service. The HSE/Railtrack type approved Thales equipment is now widely fitted on all types of mainline traction. Through air piping for emergency rescue purposes (we hope it will never be used!) is also to be fitted but the loco is to remain vacuum braked so an air pump will not be required (as frequently found on mainline steam locos these days with strange sound effects). A sum of £15k was budgeted to cover this work to comply with the new HSE/Railtrack safety standards and we will not be far adrift from this when all bills are paid. Visually, there is little evident externally of the new equipment except that the conduit, which Manor Class engines used to have for the former GWR Automatic Train Control (ATC) system along the right handside under the footplate, but absent from our locos in preservation, has reappeared to serve the TPWS/AWS cabling required to the aerial receiver on the front bogie. In the cab, much of the equipment has been mounted within the housings of the ATC controls to maintain the traditional appearance as much as possible.

7812; The boiler, which had been removed from Bradley in late 2001 and subsequently stored on a well wagon at Erdington, was in September moved back to Bridgnorth and in early October was lifted into the Boiler shop. The same day, descaling commenced and over the next few weeks an EMF volunteer team, led by Terry Jenkins and numbering up to 8 strong on some days, removed smokebox exhaust gear, superheater elements and tubes although some difficulty was experienced getting the main steam pipe clear. Nearly 200 man hours had been expended on this by our own volunteers up to the time of writing. It is intended that this activity will continue with the removal of deteriorated stays ready for SVR boilersmiths to commence the refurbishment, hopefully as soon as they come free from other current boiler shop commitments. Meanwhile, new tyre treads have been delivered from Spain, which are to be fitted to 7812’s driving and bogie wheels. The loco chassis, currently still at Bewdley, is intended to be moved to Bridgnorth, hopefully sometime in the near future, for lifting on the jacks and commencing the re-tyring of the locomotive. A major expenditure during the year was a new chimney casting for 7812. With the newly rebuilt 3500 gallon tender virtually complete, and boiler overhaul and wheel re-tyring work hopefully coming together during 2003, a return of Erlestoke Manor to SVR operational service sometime during 2004 season now appears possible. Mainline running is not at present envisaged for this loco.

The Vans; The EMF Sales Coach, former GUV parcels van no 86105, has received some TLC from volunteer Don Cook who has during 2002 been smoothing down and repainting in undercoat the badly crazed sunny side after previously waterproofing and repainting the roof. This has greatly pleased Geoff Richardson whose usual lively banter was occasionally being dampened by drips from the ceiling. During January, Don has installed a new door in the bulkhead to the storage end of the van and improved the layout of the sales area giving more space.

The Fruit D stores van, no W92090, received a freshening coat of maroon during 2002 and the timber steps have been refurbished. Bob Marrows’ former GWR Engineering Dept Riding Van, No W162, also had its full length two tier footsteps refurbished during the year with re-useable materials donated from other groups. These vehicles hopefully no longer risk the critical censure of the SVR Health and Safety Manager and both now look considerably smarter as a result.