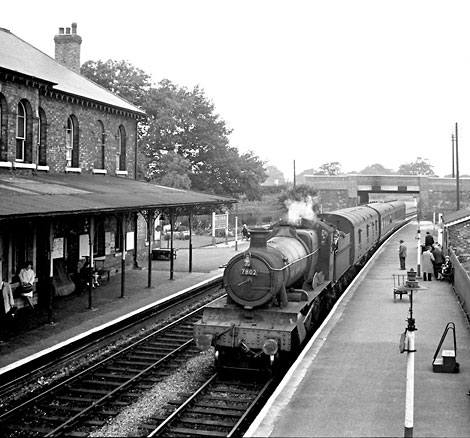 During the 1930s the Great Western Railway updated its locomotive fleet, introducing a series of standard designs based firmly on development which had taken place since the turn of the century.

As part of a family of designs the Manors have many similarities with other GWR classes most notably the Granges. The need to produce a lighter version meant that the GWR developed a new boiler design specifically for the Manors – the Swindon No 14 boiler.

As built the locomotives were paired with much older Churchward 3500g tenders.

Following GWR tradition the locomotives carried names relevant to the area covered by the GWR with 7802 named “Bradley Manor” after a 15th century Manor House 2 miles west of Newton Abbot and 7812 named “Erlestoke Manor” after an estate and house 6 miles west of Devizes.

Almost immediately pressed into wartime service 7802 and 7812 were both allocated to Bristol depots.

Withdrawal from Service and Sale as Scrap

Following World War 2 the railways of Great Britain were in a very run down state and had suffered from under investment and competition from road transport. Heavy financial losses continued and a Modernisation Plan was developed to both reduce the size of the network and eliminate steam traction.

As a result steam traction was run down as dirty, inefficient, labour intensive and unattractive to work on.

Firstly 7812 found itself displaced from the South West by the early onset of dieselisation in 1960(?). Regular piloting of express trains over the gradients between Newton Abbot and Plymouth was no longer required with reducing train lengths and powerful diesels. Fortunately 7812 found further employment joining its sister locomotives on the former Cambrian lines.

Regional boundary changes saw the Cambrian routes change to London Midland Region management and younger BR Standard locomotives displaced by dieselisation elsewhere became available. As a result the rein on the Manors in North Wales came to an end in late 1965 at the same time as the remaining Western Region examples were taken out of service.

With a few last rites on special workings during their last year in service, 7802 and 7812 were withdrawn in November 1965 along with the other Manors by then allocated to Shrewsbury Depot.

From the late 1950’s faced with the disposal of thousands of redundant steam locomotives, BR had created a market in their disposal as scrap to private contractors.

Tranches of several locos were offered for sale by competitive tender and with a near flooded market sold at knock down prices to the highest bidding contractor.

As a result Manors 7802/12/19/20/21/22/27/28 were all sold to Woodham Bros of Barry and towed there on what should have been their final journey in spring 1966. Interestingly 7802 was the last to make that journey lingering at Shrewsbury for several months after the others had gone. The reason for that remains a mystery.

Had they been sold to any of the other contractors it is certain that breaking up would have taken place within weeks.

Rescue from the Scrapyard

Woodhams commenced the scrapping of redundant BR Steam locos in the late 1950s and also had contracts to scrap wagons and coaches from BR. The volume of wagons and coaches being scrapped increased in the mid 1960s as the BR modernisation plan was in full swing and although steam locomotives were also acquired by Woodhams they were set aside on arrival with only the removal of non ferrous fittings. As a result by 1968 over 200 steam locos had accumulated in Woodhams yard at Barry.

Having put all efforts into the preservation of a very limited selection of locomotives straight from BR service, the enthusiast movement came to be aware of the continued existence of the Woodham’s locos and once BR steam became extinct in 1968 attention inevitably turned towards possible acquisitions for preservation.

By 1973 the DFR was well underway and after inspecting the remaining Manors then at Woodham’s, 7812 was selected as most suitable for preservation and the “Erlestoke Manor Fund” was formed by a group of like minded DFR members. A meeting with Dai Woodham at Barry in February 1973 secured a reservation on the loco and its rescue was underway.

Raising the initial purchase price of the locomotive and tender presented a significant hurdle at £4,000 when the average wage was just a few hundred pounds per year. Fundraising included the sale of shares, donated relics and models, sponsored walks and donations. The introduction of VAT in march 1973 added a further £400 to the sum to be raised. To avoid a further price rise and with half the purchase price raised a loan for the balance was taken in June 1973 enabling purchase.

Purchase of 7802 in 1979 was a low key affair involving a large loan and was aimed solely at ensuring that the locomotive was not cut up for scrap and remained available as source of spare parts!